Our Lady of Guadalupe

Throughout the ages many occasions when mother Mary, mother of Jesus Christ, Gods mother has appeared to the man to reveal some message or teaching to the humankind, to remind the importance of prayers and to perform many acts of healing and other miracles.

The earliest recorded Marian apparition officially recognized by the Catholic Church, known as Our Lady of Guadalupe, took place in Mexico City in 1531. On early morning of December 9th 1531 a local peasant from Nahua tribe, born in 1474 and living in a small Indian village Tlayacac some 20 km (12 miles) north of Tenochtitlan (Mexico City), baptized in Christianity probably in 1524 or 1525 by Franciscan missionary Fray Toribio de Benavente, called “Motolinia”, or “the poor one”, by the Indians for his extreme kindness and piety, was on the way. His Christian name was Juan Diego, 57 years old, his wife Maria Lucia had passed away a couple of years earlier, and every Saturday and Sunday mornings he used to undertake the 2.5 miles distance to attend the Mass in the nearest church.

This Saturday on December 9 1531 when Juan Diego is passing the Tepeyac Hill he suddenly hears a sweet and harmonious singing, as it seemed to him and a woman’s voice calling him to the top of hill. When he nears the top of the hill he sees a radiantly beautiful lady, who reveals that she is the Virgin Mary and tells him to go to the bishop and tell him that a temple should be built in her honour at the bottom of the hill. Juan Diego immediately went to Tlatelolco, to the palace of Bishop Juan de Zumárraga, a Franciscan friar. The bishop receives him kindly but, for the moment, is reluctant to believe Juan Diego’s story. And so a discouraged Juan Diego goes back to the top of Tepeyac Hill and admits his failure to the Virgin. The Lady directs him to go back to the bishop and repeat the request.

The incredulous Bishop demanded that he be provided with some proof of the unlikely encounter. Confused and fearful, Juan Diego avoided Tepeyac for several days, but on December 12, while rushing to find a priest to attend a seriously ill uncle, he took a short cut across the hill. The Virgin once again appeared and Juan Diego told her of the Bishop's request for a sign and that he is running for a Priest for his seriously sick and dying uncle Juan Bernardino. The Virgin Mary told him she is the Mother of God and all people and nothing can happen without Her knowing. She promised his uncle will be cured and will not die. Instead she instructed Juan Diego to pick roses from the usually sere and desolate hill and deliver them to Zumarraga as the sign. Juan Diego

obeyed without making any remark, although he knew for certain that no flowers or any plant ever grew or would grow on that group of rough rocks. He reached the top and found there a beautiful garden of Castilian Roses, fresh and fragrant and with the morning dew; and gathering them in his tilma or cloak, as the natives used to do. Once again before the Bishop and several other witnesses, St. Juan Diego opened his tilma, a poor quality cactus-cloth, the roses fell to the floor and at the same time, the image of Mother Mary appeared on the tilma. The Bishop fell to his knees, begging forgiveness for he had not believed. He took the tilma into his private chapel and placed it beside the Blessed Sacrament where he gave thanks and praise to the Lord for having been the recipient of such a wondrous gift. Within two weeks, the first humble house or temple was erected on Tepeyac Hill. Here, the miraculous image of Our Lady of Guadalupe would remain. Word of the apparitions spread and people flocked to see the image of Mother Mary.

When Juan Diego went home accompanied by a few servants of bishop, his uncle Juan Bernardino was cured and assured him that just at that same hour a lady of the same description had appeared to him also; that she had cured him, and said that it was her pleasure that a Temple should be built in the place that his nephew had seen, and, also, that her Image should be called Saint Mary of Guadalupe. 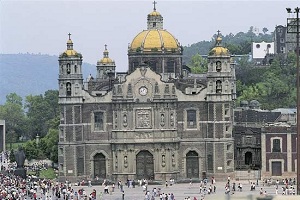 Nowadays the basilica of Our Lady of Guadalupe is the most visited pilgrimage centre in the Christian world. Each year around 18- 20 pilgrims arrive to receive the blessings of Holy Mother Mary of Guadalupe. An incredible list of miracles, cures and interventions are attributed to Her. Altogether 25 popes have officially honoured Our Lady of Guadalupe. The Pope John Paul II visited her Sanctuary four times: on his first apostolic trip outside Rome as Pope in 1979, and again in 1990, 1999 and 2002.

The Feast of Our Lady of Guadalupe is celebrated on December 12th. John Paul II most recommended to pray Her for protection and especially to ask Her protect the innocent lives of children, especially those who are in danger of not being born.

These apparitions of Mother Mary in Guadalupe are fully approved by Archbishop Alonso de Montúfar in 1555.

Prayer to Our Lady of Guadalupe

What is Orthodox Christianity

Prayer - the Breath of the Soul